Cheers to a great and successful harvest! 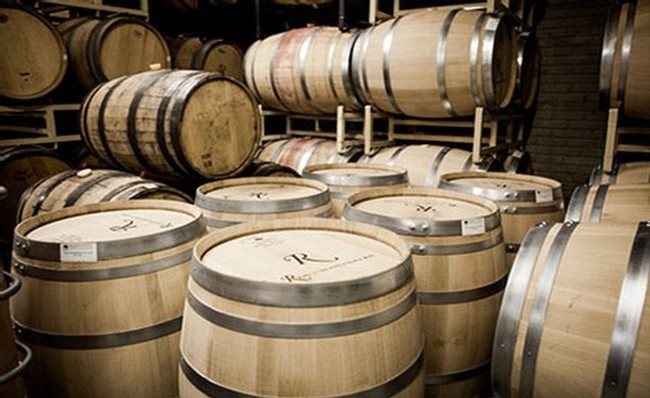 All the 2015 vintage fruit is in, and we couldn’t be happier with the quality! The mostly warm, dry weather throughout the growing season really built our anticipation for a special vintage. There was a short bit of rain at one point - it came through from the hurricane right in the middle of our plans for picking - but we bided our time, the rain ended quickly, and luckily had very little effect on the crop. The fruit this year was fantastic!

Harvest actually began with our Seyval in the second week of August - that's a record early start for us - and now that it is all in from the vineyards, we have roughly 34,000 gallons of wine either fermenting or just finishing up fermenting in the cellar (that's a lot of wine!)

Fermentation: the harvested grapes are either pressed or macerated, and primary fermentation begins when yeast converts sugar into alcohol

Many of the whites have finished primary fermentation, so those wines are either resting in tanks (for our crisper, more fruit-centric whites) or aging in barrel (for our more full-bodied, deeper whites).

On the red side of things, some of our early Cabernet Franc and Merlot wines have just been pressed off: that's when the fermented juice has had enough contact with the grape skins, and it's time to pull the juice away from the skins, tannins, and spent yeast cells, so that the wines can barrel age and/or be used for blending. However, we still have 45 tons of red wine fermenting in tank, so we’re still going through and performing "pump overs" at least once a day: a pump-over is one way to make sure that the red juice remains in contact with the grape skins; the skins float to the top, so you take the juice from underneath the "cap" they form, and pump them over ...just another way to say "a good mixin'!"

Pump Over: the process of pumping red wine up from the bottom of the tank and bringing it to the surface. When this happens the skins of the grapes are submerged and the carbon dioxide is pushed out.

Even though we've brought all the fruit in from the fields, there is still so much to be done in the cellar. We'll continue pump-overs and pressings for the next few weeks as we complete fermentations and move the wines into their various containers (tanks or barrels) for further aging and/or blending.

This has been an absolutely stellar vintage for both reds and whites, and a very exciting time in the cellar. It’s not often you get a vintage of this caliber and have so many wines showing so incredibly well this early.

We're really looking forward to showing everyone what's going on downstairs, and we look forward to sharing these finished wines with you!